Players not only like the bell garland for its quality and style. It also produces a more centred sound which is less likely to break out in Forte playing.

All bells have the same diameter at the thread as well as at the far end, are however in each case about 5 mm higher than the previous one. Thus, the L-bell (seen from the screw) flares somewhat faster than the M bell, and the XL even more strongly. M is the standard bell for the Brendan, L for the Americus and the XL belonged in former times to the Concorde model (which at present is no longer available). The different bells can be combined partially with the different tapers, then the Brendan can be played also well with the L-bell or Brendan as well as Americus with the XL bell. L gives somewhat more volume to the sound. XL produces a sound characteristic similar to the Conn 8D.

A detachable ( srew) bell clearly has some advantages over a fixed one. One is that the suit-case shaped case or bag) is easier to handleand less likely to bash into things around it, including people! A horn gets the most depressions and scratches within the bell range but with the screwing cup a repair is substantially more easy and more economically to be accomplished. A further and substantial advantage is the possibility of using different bell flares with the instrument, because the width and different materials can have large influences on sound and blowing characteristic.

The standard with most brasswind instruments. Good durability and sound characteristics.

Deeper in sound and colour. Softer and warmer in tone.

The hardest of the three. Produces a clear and bright sound.

With or Without Lacquer

Some times musicians order the option “without lacquer finish”. Some musicians have the opinion that the film of varnish affects the vibration behavior of the instrument unfavorably. However, so far there exists no clear proof about this.

The “Flipper” can be adjusted so that the index finger rests upon it, a part of the weight of the instrument can so be suported by this part of the hand.

The adjustable finger hook permits a better adjustment to the position for holding with the little finger.

The standard design of most horn models comes with two water keys. Additionally further flaps can be added according to desire. 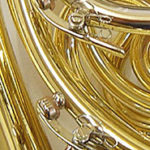